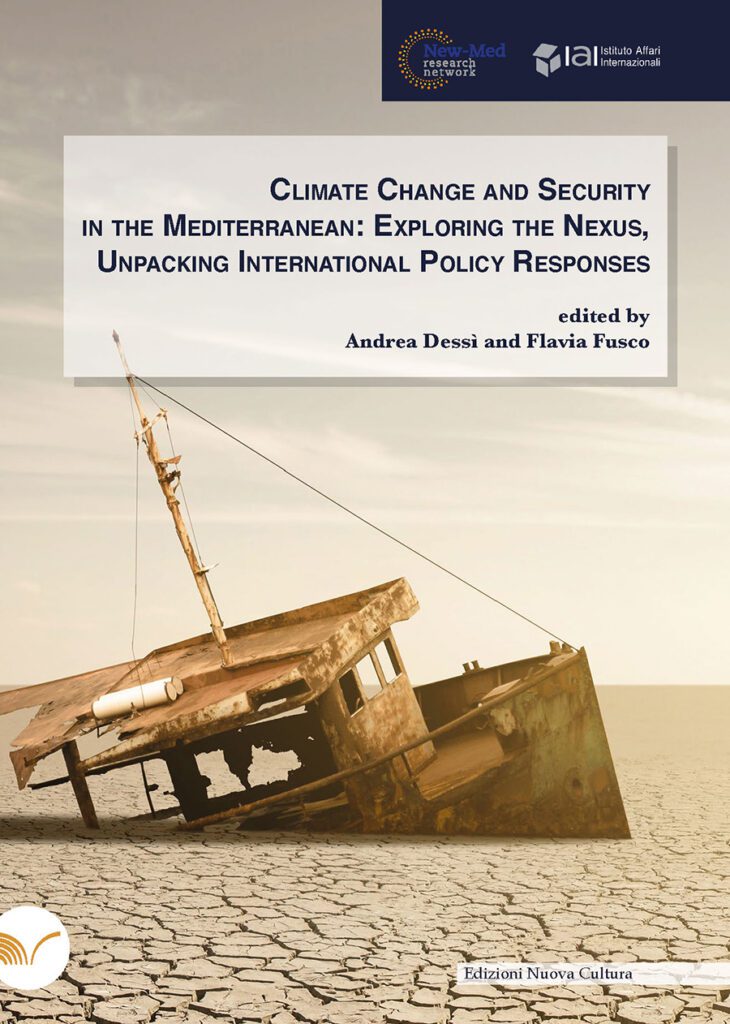 Established in June 2014, New-Med is a research network of Mediterranean experts and policy analysts with a special interest in the complex social, political, cultural and security-related dynamics that are unfolding in the Mediterranean region. The network is run by IAI, in cooperation with the Italian Ministry of Foreign Affairs and International Cooperation (MAECI), the OSCE Secretariat in Vienna and the Compagnia di San Paolo Foundation. At the core of New-Med’s activities stands the need to rethink the role of multilateral, regional and sub-regional organisations, making them better equipped to respond to fast-changing local and global developments and address the pressing demands coming from Mediterranean States and societies.

This volume examines the multidimensional relationship between climate change and security across Mediterranean Basin states and societies, underscoring the key social, political and economic challenges of the present climate emergency and outlining possible cooperative avenues to mitigate its most adverse effects. Part of a broader research and engagement agenda on climate and the environment undertaken by the New-Med Research Network since 2020, individual chapters, written by leading scientists, academics and policy researchers, tackle different dimensions of the climate change-security nexus in the Mediterranean, assessing its implications on state and societal resilience, the future of living ecosystems and the stability of social contracts as well as the urgent need to strengthen genuine intra-Mediterranean collaboration to face the climate emergency and promote an equitable sharing of the risks and burdens associated with the green energy transition.

Andrea Dessì is Head of the Italian Foreign Policy Programme and Senior Fellow within the Mediterranean, Middle East and Africa programme at the Istituto Affari Internazionali (IAI). He is also Scientific Director of the New-Med Research Network and Editorial Director of IAI’s English-language series IAI Commentaries. Andrea’s research interests include EU and US foreign policy in the Middle East, conflict & peace studies and human security. Andrea holds a Ph.D. in International Relations from the London School of Economics and Political Science (LSE) with a thesis on the US-Israel relationship during the 1980s. He has worked with IAI since 2011 and has contributed to a number of EU-funded projects and international research centres and media ouutlets.

Flavia Fusco was Junior Research Fellow within the Mediterranean, Middle East and Africa programme and the Italian Foreign Policy programme at the Istituto Affari Internazionali (IAI). After almost two years of research experience at IAI, firstly as an intern and subsequently as a Junior Researcher, Flavia started her Ph.D. in Peace and Development Research at Gothenburg University in Sweden in August 2021. She holds a Master’s Degree in International Relations of the Middle East and North Africa from the University of Naples “L’Orientale” where her thesis critically analysed decentralisation policies as peacebuilding and developmental tools in the Middle East, focusing on the case studies of Lebanon and Iraq. Her research interests include peace and development studies, and critical and local peacebuilding with a regional focus on the Middle East.